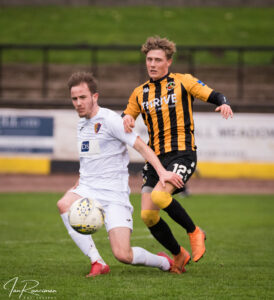 A goal from substitute Dan Purves wasn’t enough to help Berwick get a point on their travels at Lowland League newcomers Bo’ness United, as the hosts continued their impressive unbeaten run.

Ahead of the match at Newtown Park, manager Ian Little made two changes from the goalless draw at BSC Glasgow last weekend, with Grant Nelson replacing the injured Jordan Sinclair and Ali Forster coming in ahead of Kieran Somerville at right wing-back.

The ‘Gers started the game nicely and had a couple of chances in the opening five minutes, with the club’s centre-back trialist seeing a shot blocked after the ball fell to him from a Jack Wright free-kick, while Lewis Allan spun well and fired a goalbound left-footed shot that was also blocked a few yards from the line.

Dougie Horne was called into action for the first time around ten minutes in, getting down well to thwart a Tom Grant shot with his feet after the defence had momentarily switched off when a free-kick on Berwick’s right-hand side was taken early, while the big stopper then punched clear from a free-kick from the opposite flank.

Approaching the half hour mark, the home side were awarded a penalty. A ball was floated into the box from the right flank with Forster and his opponent jumping together in what looked like a standard 50/50 aerial challenge. However, as both players ended up on the deck, the referee adjudged Forster to have fouled his opponent, although the blood spurting from the head of the Berwick defender and a subsequent trip to A&E for stitches around his eye suggested otherwise.

After three minutes down injured, Forster – who was discharged from hospital yesterday evening – was replaced by Somerville and Ryan Stevenson sent Horne the wrong way from the spot to put Bo’ness 1-0 up.

Berwick responded well, with Euan Smith influential in central midfield spreading the play out to the flanks to get crossing opportunities into the box. However, on most of these occasions, the balls in couldn’t find the top two, with a cross from Sam Daniel evading the head of Calum Smith and a Jack Wright free-kick just passing the head of Ryan Finnie on the stroke of half-time.

Good chances also fell to Calum Smith, who was denied by an excellent last-ditch tackle from former ‘Gers man Devon Jacobs just as he was about to pull the trigger, and Grant Nelson, who stung the palms of the goalkeeper from 20 yards out after being teed up by Allan.

Despite being the better side for much of the first half, the second half became more open and a streetwise Bo’ness side began to assert their dominance on the game. Craig Reid made a fantastic block to deny the home side a second goal, while Berwick were unlucky not to strike back as Euan Smith and Calum Smith both had chances from successive corners.

A lapse in midfield saw Bo’ness pounce to go two goals up though, with a ball played through to Kieran Anderson who finished clinically when one-on-one with Horne. The home side could’ve easily had a third just minutes later, too, but Nicky Locke blasted over on the angle from ten yards out.

Two goals down, Little sought to change things up with forward Dan Purves replacing Daniel and, within ten minutes, he’d pulled one back for the ‘Gers – a long ball from Horne flicked onto his path by Allan and he squeezed the ball underneath the onrushing goalkeeper.

With 15 minutes to go and game very much on, what would’ve disappointed the management team and fans watching on the excellent Bo’ness stream alike was the lack of pressure and clear-cut chances made thereafter.

The home side managed the closing stages expertly, drawing clever fouls and defending resolutely, although given that Purves’ goal came from a long ball, there were surprisingly few of those for the Bo’ness defence to deal with – despite the fact that Calum Smith and Allan both remained on the pitch.

A difficult day at the office for the ‘Gers, but the squad will be looking to bounce back as soon as Tuesday when they face University of Stirling at Shielfield Park, with the students having started the season well until a 4-2 defeat at home to Dalbeattie Star yesterday.