The club is delighted to confirm the signing of centre-back David Ferguson on a deal until the end of the 2020/21 season.

The 24-year-old, who has started the past three games for the ‘Gers as a trialist, signed his contract at training tonight, with the club incredibly grateful to two sponsors and lifelong fans for helping to make this deal possible.

Ferguson is a product of the youth academy at Motherwell and made 16 first-team appearances for the Scottish Premier League side between 2013 and 2017. During those years, he also spent time on loan at Alloa Athletic, Annan Athletic and Airdrieonians. 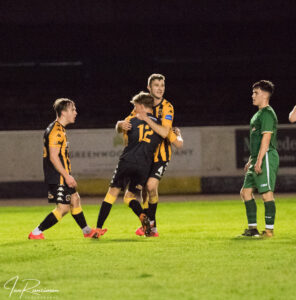 In the summer of 2017, Ferguson signed for Ayr United and played 27 times in a season-and-a-half, before joining Dumbarton on loan for the remainder of the 2018/19 season. That summer, he returned to Ayr briefly before joining Peterhead, where he featured 19 times in all competitions last season.

Without a club, Ferguson trained with the club and, due to a defensive shortage with Jack Cook and Kevin Waugh out injured and Craig Reid suspended, he started as a trialist in the 0-0 away draw at BSC Glasgow and kept his place at the heart of the defence for the trip to Bo’ness United the following weekend.

With Manager Ian Little opting for a change of shape for the match at home to University of Stirling on Tuesday night, Ferguson was pushed into central midfield alongside Euan Smith and slotted in expertly before grabbing the 93rd minute winner after diverting Calum Smith’s flick on into the net.

Speaking about the signing of Ferguson, Manager Ian Little said: “We’ve been delighted with David’s contribution since he arrived at the club. He’s shown his quality at the back and, on Tuesday night, he showed his versatility too in the middle of the park.

“So after his three games were up, we were certainly keen to explore options to bring him to the club and on behalf of the management team, we’d like to say a big thanks to the sponsors who have helped to come forward to help fund the deal.”