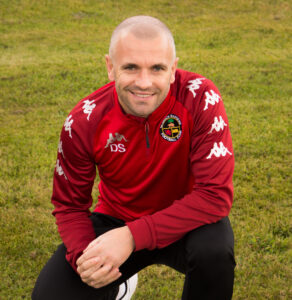 After breaking through at the ‘Gers as a teenager in the 1998/99 season, Smith spent a further six campaigns at Shielfield Park as he racked up more than 200 appearances and, as a result, he sits among the top 20 of all-time appearance makers at the club.

Such was Smith’s talent, he earned a move to Brechin City for their 2005/06 season in the Scottish second tier and remained at Glebe Park for a further three seasons upon their relegation straight back down to the third tier.

For the 2009/10 season, Smith joined second tier Raith Rovers and played 27 times as the Kirkcaldy club successfully avoided relegation, but he swiftly moved on to Alloa Athletic, where his dad Ian played and where then manager Allan Maitland described him as ‘the best part-time player in Scotland’.

Again, his stay at Recreation Park lasted just a solitary season and he then joined East Fife for two seasons and onto Arbroath for the 2013/14 campaign. After six months at Gayfield, Smith moved to Stirling Albion and, during the 2014/15 season, he had his first foray into management, becoming caretaker boss following the departure of Greig McDonald.

January 2015 signalled the end of Smith’s career in the senior leagues as he joined Musselburgh Athletic. He moved on to his hometown club, Tranent Juniors, in the summer of 2015 and was appointed as co-interim manager in November 2016 following the resignation of manager Gary Small.

Smith returned to Shielfield Park in December 2019 as a player/coach, assisting Ian Little and Kevin Haynes, taking to the field some 14 years after leaving. He played five times during the 2019/20 season for the ‘Gers and showed his goalscoring touch with a fine right-footed effort at home to Gretna.

Darren is sponsored by Berwick Rangers Seniors, the club’s affiliated Over 35 football side, who ply their trade from Shielfield and who don the Black & Gold to compete throughout Scotland.

On sponsoring Darren, Seniors representative Mark Heston said: “All at Berwick Rangers Seniors are delighted to have sponsored Darren for the new season. We wish him well on the park, as well as in his valued role as a club coach.

“The team also want to wish the entire management team and playing squad the best of luck for the new season. Hopefully it can be a positive one!”