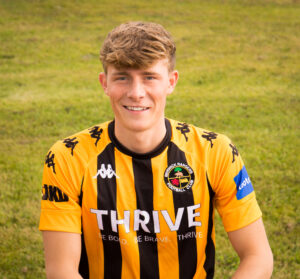 Purves was part of the club’s Development Team in the 2018/19 campaign, while he also spent the season on loan at Ormiston, where he won the club’s Player of the Year award.

On the back of that, the winger was re-signed by the club as a senior player for 2019/20 and, after mainly featuring from the bench in the early part of the season, he soon established himself in the first team and, before the premature conclusion of the season, was regularly putting in some top performances.

Dan’s kit is sponsored by lifelong ‘Gers supporters, Ronan and Katie Atkinson. The pair have been regulars at Shielfield Park (and at away games!) for many years and recently became parents for the first time to baby Callie, who it is hoped will share her parents love for the Dream Team!

On sponsoring Dan, the pair said: “We were delighted to see Dan agree to stay at Shielfield Park for another year as he was one of the stand out players in what was a difficult season for the club.

“We’ve both had some amazing times filled with plenty of highs and lows whilst following Berwick Rangers, and we’re privileged that we can put something back into the club by sponsoring Dan. Keep up the good work!”

The club thanks the couple for their generous support!