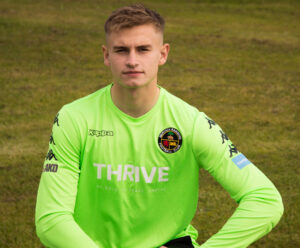 The highly-rated young stopper didn’t manage to make a senior appearance in his time at Excelsior Stadium, but is aiming to pick up experience of men’s football in the Lowland League having signed with Berwick in June 2020.

As well as training and playing with Berwick, McNeil also spends time with Raith Rovers during the week, where former ‘Gers boss Paul Smith and John McGlynn are helping to further the young stopper’s development.

Based in Edinburgh, Brian has followed the Dream Team far and wide over his decades of supporting the team, and has also helped the club out in roles ranging from a ballboy in his youth to online store manager in more recent times.

On sponsoring McNeil’s kit, Brian said: “I’m pleased to be able to sponsor Andrew’s kit for the 2020/21 season. It’s great to see an exciting young player join Berwick Rangers at a time when the club is also on the up.”

The club thank Brian, pictured below, for his outstanding support!